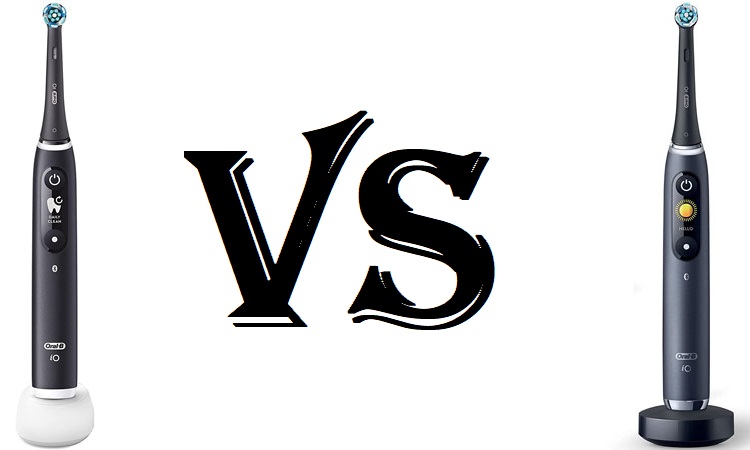 When it comes to maintaining good oral hygiene, you can either improve your technique or change the piece of equipment you usually rely on. Additionally, if your oral hygiene needs are hardly ever met with the model you use on a regular basis and you happen to have a budget that comprises no limits, two excellent electric toothbrushes that can help you combat your oral health issues are the Oral-B iO series 6 and the Oral-B iO series 9.

While the two recommended prospects are extremely different from one another due to having significantly different qualities and promising features, both the iO series 6 and iO 9 could be excellent models to invest in if you’re seeking a fresh start.

Moving on, if you’re curious to learn how the iO Series 6 keeps up with the iO series 9 when they have a stand-off, buckle up and keep reading to be provided with every piece of useful information regarding Oral-B iO series 6 vs Oral-B iO Series 9!

Before we get into all the promising aspects about the iO Series 9 and just how dominant it is in contrast to the iO 6, here’s a table that contains the key features of both the models which will surely benefit you as you move onto the following segments. If you happen to be an existing user of an electric toothbrush, perhaps you may move on to the next portion. However, if you’re a novice still, going through the following pieces of information is mandatory.

Oral-B iO Series 9 vs. Series 6: A Close Look Into Their Differences 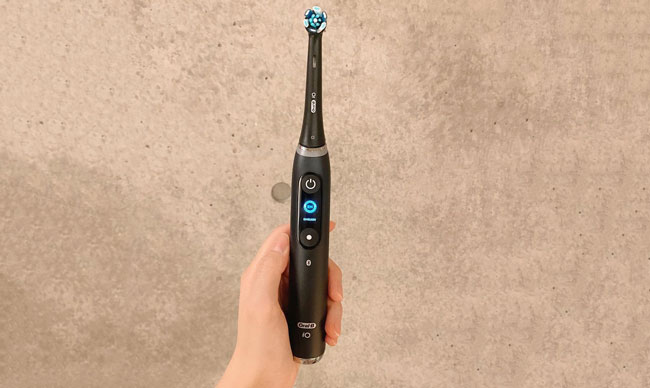 As stated earlier, the Oral-B iO 9 undoubtedly has the upper hand in most instances when it’s put in the same box as the iO series 6. However, the iO series 6 also has the edge over its counterpart when certain elements are taken into consideration. Without further ado, here are all the differences between the iO Series 6 vs the iO Series 9 that could be crucial factors to take into account before you come to a decision!

The first noticeable difference lies behind the groundwork of each model.

The iO series 9 comes with a brush handle that comprises a matte finish and also contains a lean build. Underneath the power button is an LED screen that usually tracks the battery life, but is typically used when navigating through the available brushing settings. It also comprises an LED ring right underneath the brush head, which comes in handy when the pressure sensor comes into play.

In contrast to the series 9, the iO 6 is similar in terms of design. It too contains a lean handle, a matter finish, an on/off button, with an additional button to skim through the brushing mode it offers. However, unlike the iO series 9, the iO 6 comes with a black and white LED display, which could be a turnoff for users that like colour, but could please those that are minimalists.

The Series 9 Consists Of 7 Modes

Perhaps the main feature that puts the iO series 9 in a league of its own lies behind the amount of brushing settings. In contrast to its predecessors, the iO series 9 offers users 7 settings, which involves an extra mode for sensitive gums. It also comes with Tongue Clean, which is typically utilised to clean the tongue thoroughly and improve the complexion of one’s tongue.

The iO 6 on the other hand, brings to the table 5 brushing modes; all of which can be found in the iO 9 and its successors. Although it does fail to have the edge over its counterpart due to the 2 additional modes it lacks, the iO series 6 has the same amount of pulsations and oscillation movements that can be found within the build of the iO series 9.

Both Of Them Comprise Different Chargers

Since the iO series 6 was obviously released before the iO 9, a component that it doesn’t come with is the magnetic charging stand. Inside the box of the series 6 is a standard charging stand, which takes around 12 hours to recharge the Li-Ion battery of the model.

The iO 9, on the other hand, despite containing the same battery, comes with a magnetic stand, which contains fast charging. On average, the iO Series 9 reaches 100 percent charge in the span of 3 hours with the help of the magnetic stand it comes with.

Improve Your Oral Health With The Help Of 16 Tracking Zones!

Another impressive piece of equipment that the iO series 9 contains is the Power2Go travel case, which can’t be found even in the previous models within the iO series. In addition to carrying a brush head and a handle, the travel case has a built-in charger, which could be an irrelevant trait to consider if you don’t step out of the house as much, but a defining factor if you constantly need a travel buddy!

Furthermore, just like its successors and predecessors, the iO series 6 comes with a standard travel case, which looks much better than the plastic-like material that the Power2Go travel case is made of, but doesn’t have the tools to charge the brush head inside its case.

Stay On Budget With The iO Series 6!

A component that many often fail to consider is the price of both models, which is drastically different from one another.

The iO series 6, despite lacking vital features, currently stands at $119.99, making it an extremely affordable installation within the iO series.

On the other hand, since the iO series 9 has loads of technological features that can’t be replicated or mimicked by the iO 6 or any other models in the iO series, its value currently stands at $299.99

Now that you’ve learned how the technological factors that both contain sets them apart in addition to their value, it’s time to closely examine the characteristics that bring them together at the end of the day. Long story short, here are all the similarities that the iO series 6 has when compared with the iO series 9! 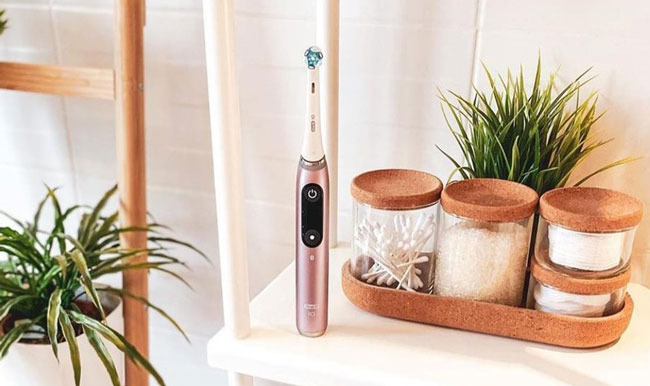 Performance-wise, the iO series 9 is usually the bigger and better option when you take into account its key features. However, both the iO Series 6 and Series 9 contain the same technological attributes.

In addition to having a built-in quadpacer that prevents users from exceeding 2 minutes during each brushing session, both models comprise brush sync technology, which primarily monitors the lifespan of the brush head that is implemented on the model.

In addition to having a timer that stops you from over-brushing, the iO series 6 and iO 9 contain pressure sensors, which monitors the amount of force you use when cleaning your mouth with the pieces of equipment. The pressure sensor usually uses the LED ring around the brush head to give feedback on each session. When the amount of force applied to the gums is harmful, the ring turns red. On the other hand, when your form is close to perfection, the LED ring beeps green!

Although both come with a different set of charging stands, the iO series 9 has the same battery life as the iO series 6. The Li-Ion battery that’s used for both the models are usually capable of surviving for 2 weeks, which typically extends if you only use either one of the models once a day at most.

Final Takeaway: Play It Safe Or Risk It All!

Since both prospects have distinct features that are extremely fascinating and convenient, taking into account what you seek in an ideal electric toothbrush will definitely allow you to have a clearer perspective.

For instance, if you prioritise your oral health, but don’t have enough room to invest in a piece of equipment that will leave a dent on your bank account, then choosing the Oral-B iO series 6 should be your go-to move. It contains 5 settings that you can thoroughly improve your brushing sessions with, is easy to navigate, and contains a series of promising features such as the Brush Sync technology, a pressure sensor, and a quadpacer; all of which will significantly improve your brushing technique and substantially upgrade the condition of your gums and teeth.

On the other hand, if you’re not too worried about the cost, want a model that offers standard brushing modes and more, and would like to improve your oral health overnight, risk it all by spending a hefty amount on the Oral-B iO series 9, our recommended pick! In addition to offering two modes that can relieve those with sensitive gums and help users clean the mould around their tongue, a promising aspect is the Power2Go travel case that the iO series 9 comes with. It also has minor upgrades such as a colour LED display, which could be an additional incentive if you have a knack for vibrant shades.