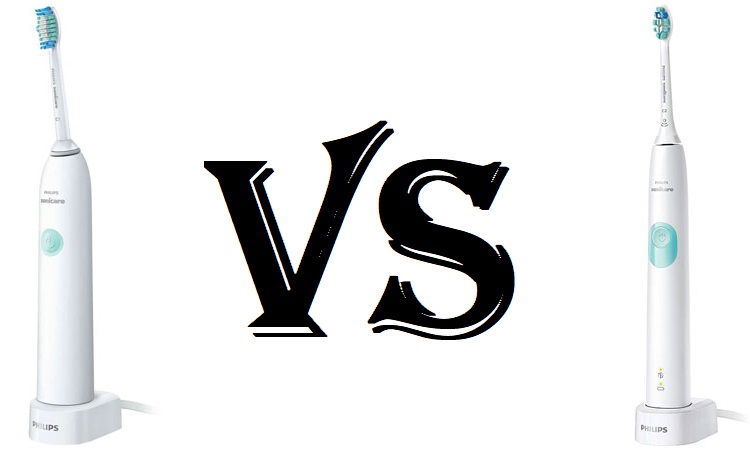 One of the best brands to count on when it comes to oral hygiene is Philips. While users often find contentment when investing in models that are known for being pricey, Philips also has tons of affordable options in their stock that could be used to tackle issues related to oral hygiene. Two of them are the Philips Sonicare 1100 and Philips Sonicare 4100.

Sonicare 1100 vs Sonicare 4100: Measuring The Differences and Similarities Using Facts and Figures

As stated earlier, the Sonicare 4100 and 1100 are extremely popular due to how affordable they are. However, that’s not all that they have in common. Follow through to learn about the similarities they have, and acquire knowledge on the characteristics that make one of them the better option!

Before I explain each aspect in detail, make sure to skim through the table below. It comprises all the key features that brings the Sonicare 1100 and 4100 together, and the major differences that separate the two models at the end of the day! 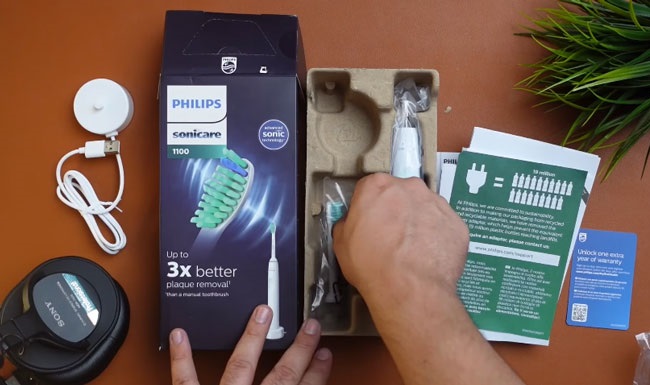 Once I opened the box of Sonicare 1100, along with the C1 Pro Results brush head, I found a USB cable, and a standard charging stand.

As opposed to the 1100, the 4100 came with a C2 Optimal brush head for plaque control, with a standard charging stand with a built-in USB port.

Taking into account how little I had to pay for 1100, I was rather surprised at the pieces of equipment I got with it. Since I paid a slightly higher amount for the 4100, I was expecting an extra brush head inside the packaging.

The design of the Sonicare 1100 has the same features as most electric toothbrush models that Philips produces. It contains a handle and a brush head, and comprises a sleek, matte build. It runs a bit chunky around the handles and the material, despite being topnotch for its value, seems plastic-like from afar, which I’m not the biggest fan of.

Although the 4100 does contain the same silhouettes as most of the Sonicare models, it looks more minimal and clean as opposed to its opponent in this bout. The handle feels slimmer and the colour looks polished.  The power button of the 4100 is also extremely different and welcomes the thumb rather naturally. The brush head is also a bit larger on the 4100 and is more compact on the 1100. 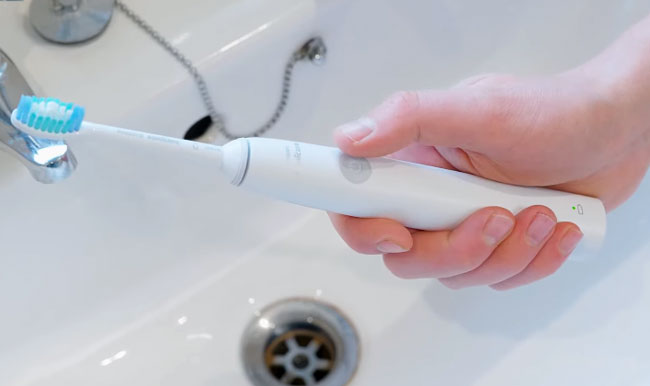 The Sonicare 1100 and 4100 have a lot of features in common. Both come with a 2 minute timer that prevents users from over brushing their teeth and gums. The timer also slows down the pace of the bristles when users go over the limit to prevent gum damage. The 4100 also comes with a built-in pressure sensor that invigilates the amount of pressure that users apply; a feature that is nowhere to be found on the 1100.

In contrast to a manual toothbrush, the Sonicare 1100 is 3 times more effective at removing plaque buildup. The 4100 on the other hand is 7 times more efficient than an average toothbrush in eliminating plaque. 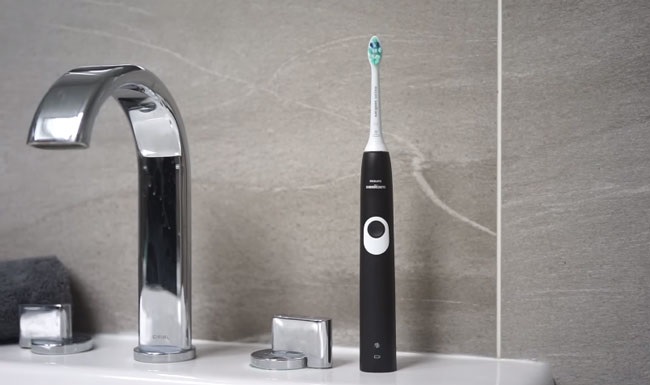 In most cases, both the Sonicare models are easy to set up and execute. The C2 brush head that the 4100 has is very easy on the gums and teeth, and even easier to navigate. The C1 brush head on the other hand might also be a bit less efficient in contrast to the former, but is much more generous than a manual brush head.

Despite having a matte finish, the 4100 is very easy to use. Even though my palms are always clammy, I never dropped the 4100 because of how good the grip was on the handle.

Due to the sleek build of both models, the battery life of each might seem a bit underwhelming. When fully charged, both the Sonicare models typically last for 2 weeks, which is the same as most models produced by Philips, but mediocre in contrast to some of its competitors.

Both models also come with a standard charger, which is a bit more compact than the traditional charging stand that you usually get with other electric toothbrushes. The charging stand comes with a USB cable as well, which tends to come in handy while travelling. However, both models lack the presence of a plug-in power adapter, which could come as a minor issue if you don’t have the power adapter from a previous model.

When it comes to maintenance, the 4100 and 1100 are equally compelling. Due to the sleeker and matte finish of the 4100, it does have the edge over the 1100 at times, especially since the design that it contains allows it to eliminate the gunk of toothpaste on the daily with ease.

The brush head of each model normally lasts for 3 months, but can also last for a longer period of time on the 4100 if the low intensity mode is used more than the high intensity mode.

The first surprise came to me when I purchased the two models. I didn’t have to leave the house to purchase the Sonicare 1100 and 4100, but they were extremely affordable.

The Sonicare 4100 was just short of $50 and the Sonicare 1100 was slightly above $35. The 1100 would’ve been even cheaper if I would have purchased the newer and slimmer model.

Taking into account the cost, I believe both models are extremely useful for beginners, especially if they’re not keen on spending big and only want to replace their existing manual toothbrush.

Listed below are some questions regarding Sonicare 1100 vs 4100 that I found on the web. I hope the answers help you in one way or the other!

Question: Can I use Philips Sonicare 4100 with braces?

Answer: Since the 4100 is known for its efficiency, using it to remove the residue of food around your braces could be a great plan to go forward with. However, since the high-intensity mode is known for being aggressive, keep the intensity level low. You may also invest in the Sonicare 1100 to clean the difficult areas around your braces.

Answer: Due to the matte and compact finish of the 4100, the electric toothbrush can most definitely be used in the shower without an issue. However, since the 1100 is known for collecting gunk, using it in the shower might compromise its shelf life.

The Sonicare 1100 and 4100 are extremely convenient for those that are looking for an effective replacement for their manual toothbrush. While the similarities between them are plentiful, the additional LED for the brush head, the extra intensity mode it comes with, and the built-in sensor that it has makes the 4100 more desirable in certain scenarios, and makes it the winner amongst the two in my eyes.

However, while I did side with the 4100, the 1100 could very well be a good purchase if you’re seeking to improve your oral health but happen to be under a budget. While it does run a bit chunky, the 1100 is surely a good way to kick start your transition to electric toothbrushes.