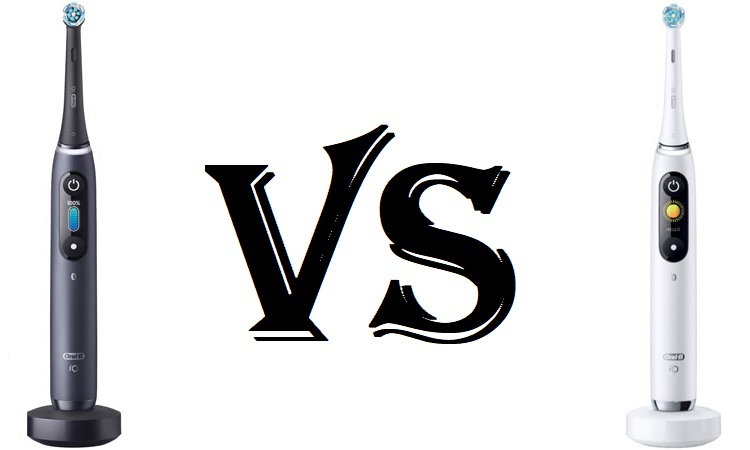 A brand that dentists often recommend to deal with oral health issues is Oral-B. Amongst the electric toothbrush that Oral-B has produced so far, two go-to suggestions and favourites of dental specialists are the Oral-B iO Series 8 and 9.

As both models were released around the same time, it’s easier to assume that they’re packed with a series of similarities. However, when both are examined thoroughly and have a direct encounter, only one option remains unhinged and victorious!

Before I share my two cents on Series 8 and 9 and explain to you all the things they have in common as well as the differences that divide one from the other, here’s a quick summary table that will definitely come in useful when you read through the second half of this write-up. Be sure to check it out if you too are struggling to pick one candidate between the iO series 8 and 9!

Paying an additional sum of $50 for the Series 9 did bother me quite a bit at first. Since both of them were manufactured and hit the shelves at the same time, I was hoping the price difference would also be minimal. However, after both packages were delivered on the same day, I was slightly embarrassed for my presumptuous remark and significantly humbled. 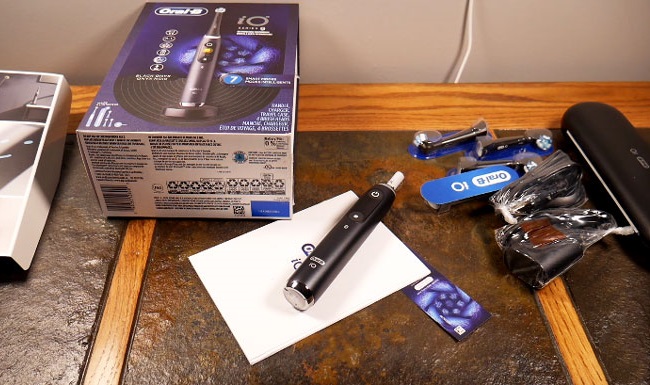 Get Oral-B iO Series 9 at Amazon

The series 8 came with 3 ultimate clean brush heads, which would typically last for around 9 months. In addition to the handle and 2 extra brush heads, the packaging also contained a travel case and a magnetic charger.

In contrast to series 8, iO series 9 had 4 Ultimate clean brush heads, meaning that it would last for a whole year. Just like the series 8, it too came with a magnetic charger, but also contained a Power2Go travel case with a built-in charger.

Before I start this segment, I’d like to give my flowers to both the participants for this bout. While coming to a decision was inevitable and mandatory, the series 8 and 9 were on the same page on multiple occasions. In fact, both of them were so effective, that my gum health as well as oral health improved drastically in the span of a month!

Regardless, here’s a thorough analysis on the common features of the iO series 8 and 9 as well as an insight into the differences that set them apart.

The Differences Between Oral-B iO Series 8 And Series 9 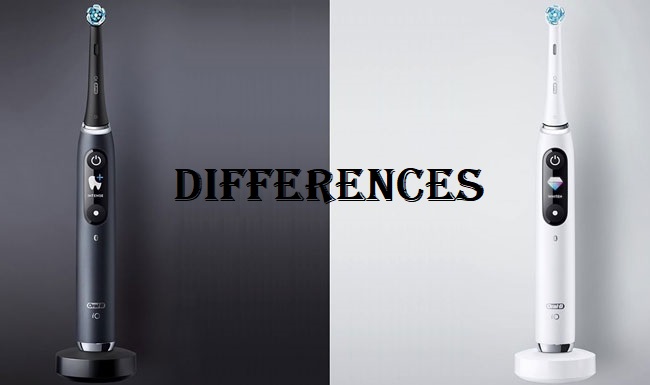 I spent the first week relying on series 8. I used it once in the morning and used it again during night time. After spending a good week assessing the specifications of the series 8, I incorporated iO series 9 into my oral hygiene routine. Here are all differences I was able to recognize and acknowledge between the two models.

The iO series 8 comes with 6 modes: Daily Clean, Sensitive, Super Sensitive, Gum Care, Whitening, and Intense. It surely has the edge over its predecessors, as all of them lack the additional Super Sensitive mode it attains.

Since I’ve had sensitive gums all my life, this feature was surprisingly refreshing and surely a game changer for me.

Additionally, as opposed to series 8, the iO Series 9 has 7 modes!

On top of having a Super Sensitive Mode, it also has a mode that solely examines and polishes the user’s tongue, known as Tongue Clean. As this clean solely prioritises, examines, and handles the hygienic health of one’s tongue, it moves at a different pace and is relatively gentle than the other modes available.

Another difference that played a crucial role in the decision making for this bout is the significant amount of zones the iO series 9 is able to track.

The series 8, on the other hand, is able to examine and monitor 6 zones around my mouth; one for each area. Although it was extremely thorough and surprisingly effective, the 10 additional zones that it wasn’t able to track made its breakdown slightly underwhelming. 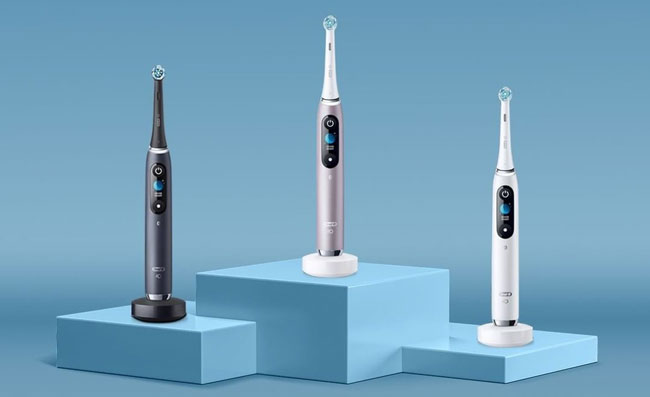 Get Oral-B iO Series 8 at Amazon

The iO series 8 comes in 3 colours: White Alabaster, Onyx Black, and Violet Amertine. The additional colour option surely makes it better than its predecessors, but doesn’t quite make it as good as the iO series 9. Why? Because the series 9 comes in 4 colours!

In addition to picking between White Alabaster and Onyx Black, the series 9 is available in Blue Marine and Rose Quartz.

While this feature didn’t have a drastic effect in the decision making for me, I believe that it could very well play a major role for those that prioritise the visuals just as much as the performance of an electric toothbrush.

An obvious difference lies behind each product’s price tag. Since the iO series 9 has more features and accessories to offer, it is rightfully more expensive than the series 8. It has the ability to track 16 zones, has one additional mode known as the Tongue Clean, and comes with one more Ultimate Clean brush head than its counterpart.

However, since there is a $50 difference between their price tags, many might find it a bit out of their budget, and resort to the series 8 instead, which is a reasonable and completely rational decision to go forward with.

The component that gave the iO series 9 the match point is the Power2Go Travel case, which also gave it the upper hand when it went head-to-head against the iO series 7.

In addition to being able to carry a brush head and a handle, the container of a Power2Go travel case has the ability to recharge the pieces of equipment; a feature that the predecessors never had.

While I did find the initiative remarkable, I did feel that the materials used for the travel case could’ve been of better quality. Nonetheless, I was very much content with the fact that I didn’t have to use the magnetic charger all the time! 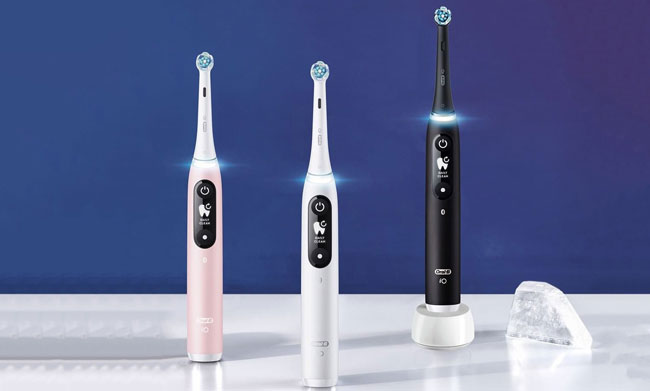 The iO series 8 and series 9 were released on the same day, so the fact that both of them had a series of things in common didn’t come as a surprise to me. Regardless, here are the key similarities that could surely benefit you and help you with making a final decision!

Both models look extremely modern in terms of design. The interactive display isn’t in black and white, but comprises a series of colours, which could be irrelevant to many, but a good option for those that consider themselves clumsy.

The series 8 and 9 both contain the Smart Pressure Sensor, which monitors the brushing technique of the user and analyses the session. It displays a red light when a user is applying too much pressure, and flashes a green light when their form is gentle and close to perfection. On rare occasions, the LED turns white, typically when the user isn’t applying enough pressure to clean their teeth.

Another similarity that is often underplayed is the built in timer that both iO series 9 and 8 have.

Since the perfect brushing routine usually lasts for 2 minutes, the built in timer ensures that users follow that ritual properly. This is an excellent feature for those that usually spend too much time brushing their teeth, and keeps a germaphobe like myself in check.

The battery life of series 8 and 9 are in the same category. Both tend to take around 3 hours to reach 100% and can be used for 14 days straight before it decides to drain out. In simpler words, you can use each model for 28 2-minute sessions before you have to put it on charge again!

The time I had with the series 8 and 9 were phenomenal. My gum health, which happened to be an issue before I carried out this experiment, significantly changed for the better. The complexion of my teeth also improved after the 7th day.

However, I didn’t see an improvement in the appearance of my tongue during the first week, but that’s when the iO series 9, my ideal pick between the two, came along and changed that issue.

Over the course of 7 days, in addition to invigilating 10 more regions in my mouth, the iO series 9 changed the colour of my tongue to pink by getting rid of all the residue of food and beverages that it previously had.

Taking into account all the new features one will be able to get access to, the Oral-B iO series 9 is definitely the better candidate when compared with the iO series 8.

While series 9 does have features that will surely amp up your oral health, it’s often at a disadvantage due to its price. That’s when the series 8 comes in.

Truth be told, the iO series 8 is very similar to the series 9 in terms of build, and battery life. It also has the same features as its counterpart in some cases, but just lacks a travel case with a built-in charger, an extra brush head, and tracks 6 zones like the former models.

All in all, although I will always pick the series 9 and side with it on most occasions, the series 8 could be an excellent model to invest your time and money in if you’re seeking a way to improve the state of your oral health without becoming financially handicapped.