A component that brands as well as users often dismiss and underplay is the brush head that is being used with an electric toothbrush. Luckily, Philips isn’t one of them.

Over the past few decades, ever since the discovery of the Philips Sonicare series, the company not only released more electric toothbrushes, but also manufactured a chain of brush heads that tackle different types of oral health issues.

While the W3 tackles issues related to tooth discoloration and counts removing all the stains around the gums and teeth as its top priority, the C3 mainly deals with oral health conditions such as plaque build-up and diminishes repercussions that result from having a bad diet in a matter of 2 to 3 weeks; both of which are models we discussed in another article.

However, two ultimate solutions to dental hygiene conditions around the gums are Sonicare G2 and Sonicare G3. Even though both of them could be reliable sidekicks to try out on a day-to-day basis, one ultimately has the edge over the other when they’re put in the same box.

From revealing useful pieces of information about their key features to discussing all their common aspects, here’s everything that you need to know about Philips Sonicare G2 vs G3!

Philips Sonicare initially released Sonicare G2 and G3 for enabling users to cope with common gum diseases such as periodontitis and gingivitis, and resolve both problems successfully over a short period of time. However, despite catering to the same demographic, both G2 and G3 have tons of individual characteristics that could benefit users on an exceptional level. Without further ado, here are all the compelling traits of Philips Sonicare G2 and G3 that could benefit your oral health tremendously! 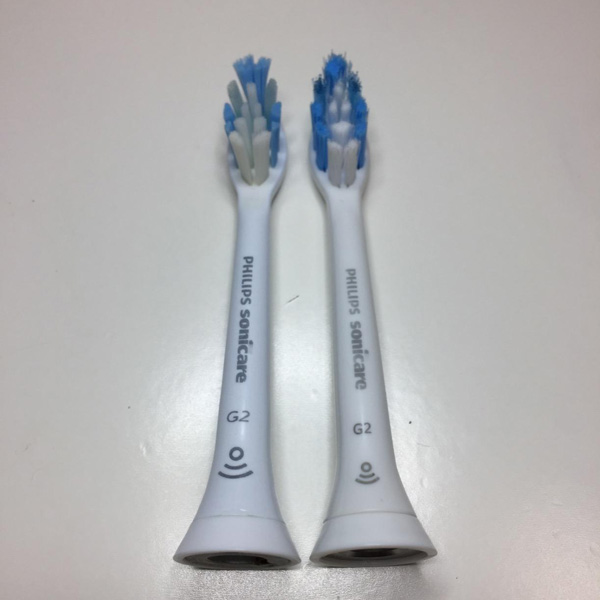 The Sonicare G2 is a brush head that you can very well rely on if your main priority is to improve the state of your gum health with your desired Philips Sonicare model.

The standard sized brush head removes 7 times more plaque than a manual toothbrush and uses rigorous movements to clean the debris between one’s teeth in a thorough manner.

Despite being standard sized, many will find the Sonicare G2 very compact due to its lean build. While smaller brush heads are almost always better, this trait of the G2 will come in extremely handy when cleaning inaccessible areas around the mouth.

The bristles of this brush head are typically neither soft or hard, but are exceptionally lenient on the gums, making it a great tool to rely on for everyday use.

The packaging of the G2 comes with 3 brush heads in total, which could explain the reason behind its lenient price tag in contrast to its counterpart. 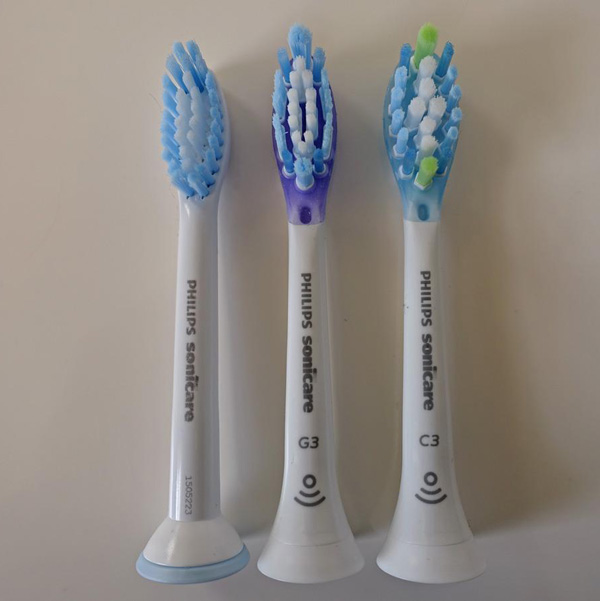 If most of your oral health issues take a toll on your gums, then the Sonicare G3 could very well be your ideal sidekick. In contrast to the G2, the Sonicare G3 is more rapid with its movement and solely caters to improving one’s gum health.

In addition to being capable of reducing gum inflammation and improving the appearance of one’s gums in under 2 weeks, the Sonicare G3 is also widely recognized for its ability to remove 10 times more plaque than a manual toothbrush; which is 3 times more than the G2.

In terms of build, the Sonicare G3 is just as narrow as the G2, but is a bit more lengthy. It also has softer bristles in comparison to its predecessor, further catering to those with fragile gums.

While both the G2 and G3 have the same price tag, the successor loses points when this factor is taken into account, as its packaging only involves one extra brush head and two in total as opposed to the G2’s three. Since the Sonicare G2 and G3 aren’t too far apart in terms of age, and have similar mechanics, there are tons of attributes that both of them mutually share which could ultimately improve your oral health in a sublime manner.

The first impressive trait that both of them have is an exceptional shelf life. On average, both Sonicare brush heads last for over 12 weeks before needing to be replaced. In other words, if you buy 2 packs of G3, the pieces of equipment will last you a whole year!

Although they do differ when the groundwork is taken into account, the Sonicare G2 and G3 both serve the same purpose. They’re both exceptional tools to place your trust in if you suffer from oral health issues that mostly affect the gums, and could be the solution to all your problems if the root of it comprises plaque build up.

In addition, both brush heads are extremely open to cooperation and are compatible with all the Sonicare models. Therefore, whether you’re using a 6 series, a 5 series or one of their predecessors and successors, don’t think twice before putting your money in the Sonicare G2 and G3!

Since most of our materials contain any and every useful piece of information regarding the topics we cover, we understand how lengthy it could feel at times.

Therefore, if you skipped out on certain portions because it was too “wordy,” get yourself back in on the loop by checking out the below-mentioned table.

It comprises all the key features of Philips Sonicare G2 and G3, which will surely be useful when you finally pick one option between the two.

Bottom Line: A Win-Win Scenario With A Catch

When coming to a decision and picking between Philips Sonicare G2 and G3, you shouldn’t stress on the budget as much due to the similarity they have in terms of price. However, the biggest factor to consider should be the series of priorities you have.

The Sonicare G2 could be a great piece of equipment to invest in if you’re seeking for quantity and quality, as it comes with more brush heads. It removes a significant amount of plaque in contrast to manual toothbrushes, and comes with brush sync technology, which could be immensely beneficial if you happen to be forgetful. Just like its counterpart, the G2 is compatible with over 10 types of models, enhancing its appeal even more. Regardless of what your oral health issues are, the Philips Sonicare G2 is very well a candidate you must consider.

On the other hand, if you’re watching your gum line recede and are seeing early signs of gingivitis as well as periodontitis, tackle those issues immediately with the help of the Sonicare G3. The design comprises a lean build, which can be useful when removing plaque buildup efficiently. The bristles that the G3 comprise are also extremely soft, reducing the chances of gum inflammation and gum bleeding for an indefinite period of time. In contrast to the Sonicare G2, the G3 is capable of removing more plaque, making it our ideal pick amongst the two options!