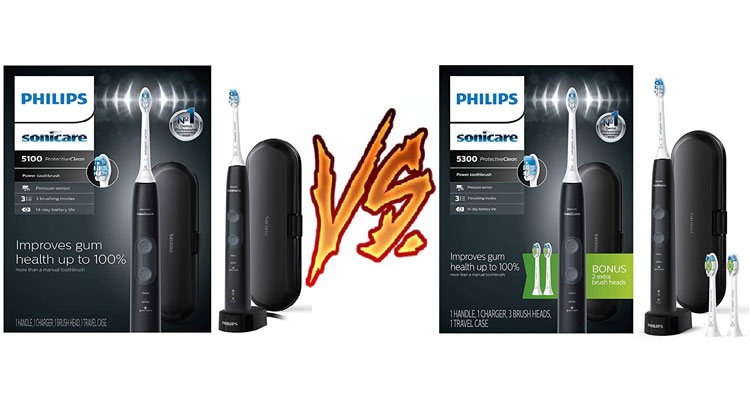 Dealing with oral health issues is never an easy task. From coping with the severe pain induced from tooth decay to suffering from gum disease, the series of dental hygiene issues one can suffer from could truly be endless if the proper technique isn’t followed, especially if the right toothbrush isn’t used.

If your technique is somewhat flawless, dropping your current toothbrush could be the easiest solution. Additionally, if you’re unsure about the options, let us present to you Philips Sonicare 5100 and Philips Sonicare 5300!

In addition to being great pieces of equipment to invest in, the Philips Sonicare 5100 and 5300 are known for being a bang for their value. While one is a tad bit more pricey than the other, the two could be very difficult to tell apart from one another due to the things they have in common. So, if you really want to be provided with all the uses that they both offer, and find out about the one key feature that sets them apart, stay with us to be rewarded with a word-for-word update on Philips Sonicare 5100 vs the Sonicare 5300!

All You Need To Know About Philips Sonicare 5100 Philips Sonicare 5100 is an exceptional electric toothbrush that has a value which barely misses triple digits. It comes with a remarkable battery life that typically lasts 2 weeks at a time when fully charged, but can even exceed the 5 week mark if the brushing mode is different.

As for the brushing modes, the Sonicare 5100 has 3 of them; Clean, White, and Gum Care. While the number of cleaning modes it offers could hamper its credibility when pitted against other brushes with a similar price tag, the fact that the 3 cleaning modes cater to 3 different scenarios makes the 5100 regain some momentum. It also comes with a 2 minute timer with a quadpacer; a feature that can really help you improve your form!

In addition to offering users a good battery life and 3 purposeful modes that effectively tackle all kinds of oral health issues, the Sonicare 5100 is also a good candidate in the eyes of those that are all about visuals. It has a sleek design with a lean build, and contains a matte paint job around the handles. Despite lacking a build that has grip, using the 5100 seems effortless, even for those that are clumsy!

The best part about the Sonicare 5100 is its simplicity. Technologically handicapped people can find tons of comfort using this model as opposed to using an instalment from the iO Series since it only contains two buttons; one that monitors the power, and another to select one of the three cleaning modes. In short, if you do go forward with the decision of purchasing a Sonicare 5100, all you have to do is click two buttons to see a massive improvement in your dental health!

That’s not all that it has, as it comes with multiple LED lights; 3 of which identify the cleaning modes, 1 that monitors the battery health using 3 different colour schemes, and an extra light that only flashes when the brush head needs to be replaced!

Things That Make The Philips Sonicare 5300 So Special Another budget friendly option that offers tons of useful features to newbies that are looking for straightforward electric toothbrushes is the Philips Sonicare 5300. It does so by containing the 3 primary cleaning modes that makes the brand so reliable, and containing helpful technological aspects such as a quadpacer with a 2 minute timer.

When using the Philips Sonicare 5300, worrying about the battery life is an activity that only exists in theory, as the Li-Ion battery it comes with can serve users for 2 weeks! If you happen to brush your teeth twice a day on a daily basis, you can rely on the Sonicare 5300 for 14 days once it’s fully charged! Depending on the cleaning mode you regularly choose, the Sonicare 5300 can even last for almost a month, especially if you normally don’t switch from Clean Mode, which is equivalent to Oral-B’s Daily Clean.

Just like most of its predecessors, the Sonicare 5300 contains a polished design with a matte handle, which offers a fair amount of grip due to its lean build. Though it isn’t as advanced as some of the models of Oral-B, specifically the dominant iO Series 9 or the Genius X, the two buttons that it consists of alongside 5 LED lights to monitor the various modes, battery life, and brush head makes this Sonicare a great model for newbies that are not necessarily bothered about the software.

The packaging it has further adds to its appeal, as it always contains two extra Diamond  Clean brush heads; which mainly works on making one’s teeth even whiter and brighter in a short span of time!

Before we carry out an in-depth analysis between the Sonicare 5100 and 5300, here’s a table that we believe you should skim through. It contains all the key features of both the previously mentioned models, consists of crucial information regarding their battery life, and also contains our recommended pick! Be sure to catch a glimpse of it so that you don’t get lost in translation when flicking through the next few segments.

Measuring The Similarities and Differences

Although both Sonicare models in this issue have their own identities, when put together next to each other, one would definitely struggle to tell them apart! From having the same build to offering each user similar features, here are all the characteristics that the Sonicare 5100 has in common with the Sonicare 5300! They Look the Same

As stated earlier, the differences between Philips Sonicare 5100 and 5300 are as minimal as it gets. They even look like reflections of one another!

Both the Sonicare 5100 and 5300 come with the same white colored brush head that runs a bit compact. The handles are draped in a matte shade of colour and are as equally lean as one another.

Both the 5100 and 5300 come with 5 LED lights that allow users to attain knowledge on the modes that are available, take notes on the battery health, and check in on the brush head’s lifespan.

On top of having the same build, both the Philips Sonicare 5100 and 5300 bring the same technological features to the table. They have the same traditional cleaning modes; Clean, White, Gum Care; all of which are equally efficient at solving the same series of dental hygiene issues.

The Sonicare 5300 also comes with a 2 minute quadpacer that prevents users from crossing the ideal duration of each brushing session and reduces the pulsation and oscillation rotations of the brush head when the limit is crossed. The 5100, on the other hand, has the same characteristics, despite being a bit older in terms of age than its counterpart.

Although the Sonicare 5100 doesn’t come with the extra DiamondClean brush heads that you will definitely find in the packaging of the Sonicare 5300, the 5100 contains the same microchip that its opponent in this bout has, making it just as compatible with other brush heads.

Another positive that you can surely find on both Philips Sonicare 5100 and 5300 is a reliable battery life. Both models have the same Li-Ion battery which has an exceptional life span. On an average, the battery, once fully charged, can last for over 2 weeks before draining out. On certain occasions, both models can even last for 5 weeks under the guidance of the Li-Ion battery, especially if one cleaning mode is constantly used.

The only time the 5100 and 5300 aren’t in sync is when the packaging is taken into consideration.

Inside the box of the Sonicare 5100, you will find the electric toothbrush, a G2 Optimal brush head, a travel case, and a charging stand.

On the contrary, in addition to finding the model of 5300 and a G2 Optimal brush head, you will be provided with 2 DiamondClean brush heads, a travel case, and a charging stand with the Philips Sonicare 5300. When all is said and done between the Philips Sonicare 5100 and 5300, both models are virtually identical in every single way. Sure, the Sonicare 5300 comes with 2 DiamondClean brush heads, which are typically used for improving the complexion of one’s teeth, but everything else is unusually similar.

On top of having a top-notch battery life, the main attraction of both models lies behind the basic nature of its build. Just like their immediate successor, the Philips Sonicare 5100 and 5300 are straightforward to use due to the minimal components that are added around the handles.

Users only get access to a button that is used for the power and a button that enables them to toggle through the 3 cleaning modes. Underneath the buttons are 3 LED lights for the three useful cleaning modes, and two more lights that monitor the battery life and the current brush head’s status.

If you feel that you’d like to improve the appearance of your teeth in addition to removing plaque build-up and resolving the condition of your gum health, spend the extra money like we would and invest in the Philips Sonicare 5300; our recommended pick. Although it has the same features as the formerly-mentioned option, it comes with 2 DiamondClean brush heads that you can surely use to change the state of your teeth and can’t find inside the packaging of the Sonicare 5100.

However, taking into account the fact that the Sonicare 5100 offers the same features as the 5300, has the same battery life and build, and is just as compatible as its counterpart when it comes to welcoming other brush heads, you can very well give the 5100 a shot, especially if you only want to replace your current reliable tool with an electric toothbrush that has no holes in its game.