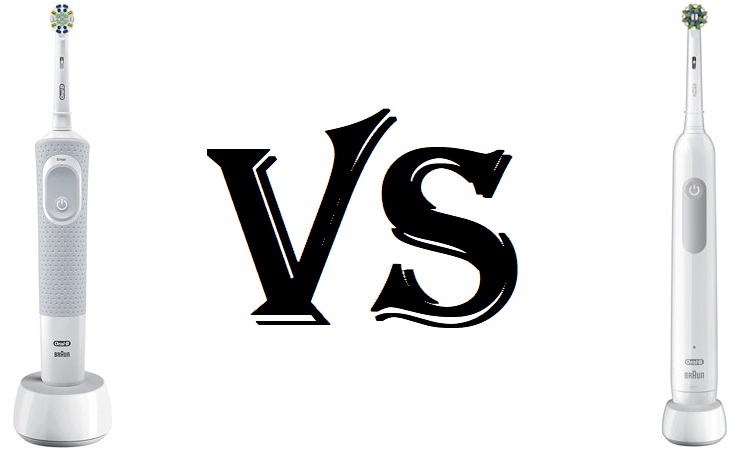 If you’re absolutely tired of using your current toothbrush and are constantly thinking of getting it replaced, give yourself a break. Have a fresh start by putting your money on the Oral-B Pro 1000 or the Oral-B Vitality.

While better options do exist in the world of electric toothbrushes, the Oral-B Pro and Oral-B Vitality could be excellent candidates to consider if you’re looking for an active replacement. In addition to offering multiple technological features to improve the state of one’s dental health, both the models could be purchased without leaving a dent on your bank account.

Before investing in one of the two, researching on each variant should be absolutely compulsory, which could very well be time-consuming. However, that’s where we come in! In addition to revealing all the impressive traits of the Oral-B Pro 1000 and the Oral-B Vitality, we will also give you a thorough preview of what it’s like when the two models collide against one another in a bout of Oral-B Pro 1000 vs. Oral B Vitality!

Before we take a deep dive into both the Oral-B Pro 1000 and Oral-B Vitality, here’s a table that will allow you to gain the basic aspects about both the models. While certain features that they have surely make both of them equally compelling, continue to the next segment to find out why the Oral-B Pro 1000 has the ultimate edge over the Vitality! 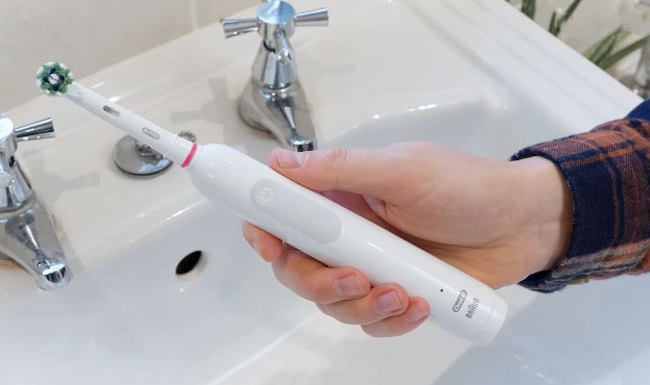 Although Oral-B Pro 1000 does lack primary features that other models contain (one link), the electric toothbrush could be a great piece of equipment to pick up if you’re seeking an easy way to replace your existing toothbrush. On top of presenting you with a modern design, the Oral-B Pro 1000 will also manage the issues of your gum and oral health with its 3D cleaning action. It has 8,800 oscillations and 20,000 pulsations, both of which will clean every inch of your mouth thoroughly.

The Oral-B Pro also comes with a built-in pressure sensor, which prevents users from applying too much strength on their teeth and saves their teeth and gums from taking damage. The handle of the Oral-B Pro 1000 usually vibrates to remind the users to put less pressure, or just winds down its oscillations and pulsations to control the outcome.

Just like most Oral-B models under $100, the Oral-B Pro contains a plastic handle. On the frontside of the hand is a power button that can easily mesh with the thumb, and a light that indicates the health of the battery life. Due to its plastic build, the Oral-B Pro 1000 could be a bit challenging to use and navigate without losing control, but the fact that it doesn’t store any residue or gunk surely makes up for that inconvenience.

While the battery life of it could use some work as opposed to other Oral-B models, it is very much understandable considering the lenient price tag it comes with. On average, the Oral-B Pro 1000 lasts for 10 days, which, again, isn’t necessarily the best, but is definitely more than good enough for how inexpensive it is. 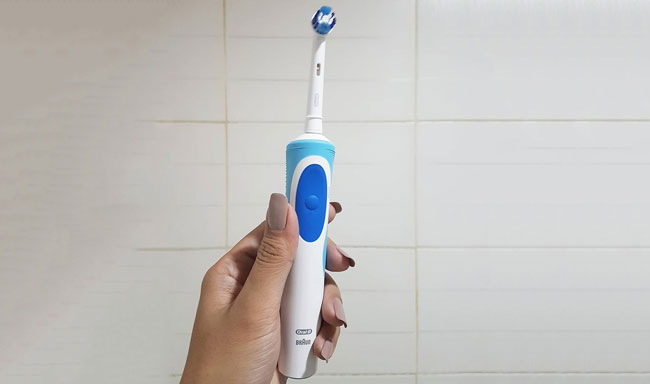 Since it isn’t directly related to the iO Series or the Pro series, the groundwork of the Vitality is slightly different. It runs a bit narrow in contrast to most of the installations manufactured by Oral-B, and has a grip around the handle that is relatively larger in comparison. The enormous grip tends to be disadvantageous due to the amount of residue it tends to collect over time, but also receives tons of praise for the admirable amount of control it provides to users.

The 2D cleaning action with the 7,800 oscillations it provides is miles better than that of a manual toothbrush, but could seem rather redundant as opposed to other promising models.The battery life of it is also understandable for the value, as it tends to last for 8 days at most.

Oral-B Pro 1000 vs Oral-B Vitality: The Key Differences That Set Them Apart

As stated earlier, both the Oral-B Pro 1000 and Oral-B Vitality have loads of things in common. In addition to being economical and attractive, they are also a part of the same renowned brand at the end of the day. However, if you’re serious about your purchase, it is important that you acquire knowledge about the key features that separate the two. 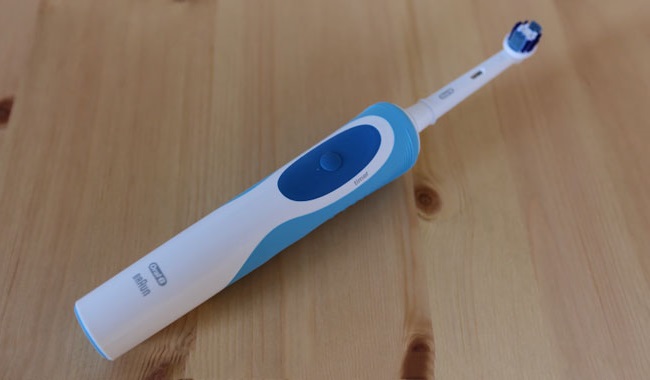 The Oral-B Pro 1000 has a 3-D cleaning action with pulsations and oscillations that are effective at cleaning the teeth. In simpler terms, even though both the Vitality and the Pro 1000 can improve your dental health when compared to a normal toothbrush, the Pro 1000 will be more efficient at getting rid of plaque build-up and reducing the risk of future cavities than its opponent due to its powerful rhythm.

A crucial but not so noteworthy difference that divides the Oral-B Pro 1000 and the Vitality is the type of brush head they come with.

On the contrary, the brush head that the Vitality has is a Floss Action brush head, which is particularly useful for those that have plaque build-up in between their teeth and right above their gum line.

Since the Pro 1000 is directly related to the Pro Series, it comes with a classic handle that comprises a cylindrical design. Although the glossy hues that it’s available in can be an appealing trait to those that are all about the visuals, the fact that the handle lacks grip makes the Pro 1000 a tad bit inconvenient to use at times.

The Vitality on the other hand is all grip and no handle! The grip covers a significant portion of the front side as well as the backside, and could be very beneficial if you’re as clumsy as I am in the morning!

Despite consisting of a user-friendly handle, the Vitality tends to collect loads of gunk, otherwise known as residue, which could be difficult in the long run and uncomfortable to clean.

A component that definitely makes the Pro 1000 more desirable than the Vitality is the presence of a quadpacer. The quadpacer, also known as a 30 second timer, solely works to improve the brushing sessions of the user. It does so by limiting each session to 2 minutes; the ideal time recommended by dentists.

While the packaging of Vitality does mention the presence of a pressure sensor, due to its 2D technology, that aspect of it is pretty difficult to notice. On the Pro 1000, however, the pressure sensor is very easily detectable, and is even more apparent due to the quadpacer it contains.

The battery life of the Pro 1000 is slightly better than that of the Vitality. It typically survives for 10 days after being fully charged, which is quite impressive taking into account how long it’s been since its release.

The Vitality loses this battle by two days, as it typically crosses 8 days and 16 sessions when it’s at its peak.

Both models are excellent budget electric toothbrushes that you can very well try out without any hesitation, but the Vitality is surely a bit cheaper than its counterpart. Although the sum isn’t necessarily significant, the Pro 1000 currently costs around $39.97, whereas the Vitality starts at $25, making it a bit more desirable in this scenario.

Mutual Benefits and Drawbacks Of The Oral-B Pro 1000 vs. Vitality

Now that you know about the crucial elements that make the Oral-B Pro 1000 a bit more worthwhile than the Oral-B Vitality, let’s talk about the common characteristics that bring them together!

The Oral-B Pro 1000 and Vitality definitely gain points when it comes to their value. While both of them have a slightly different price-tag than one another, the Pro 1000 and Vitality are significantly cheaper than many electric toothbrushes available on the market at the moment, and could very well be the perfect match for you if you’re looking for something under $100!

Despite being different in terms of build, both Pro 1000 and Vitality could be extremely convenient if you’re a novice in the world of electric toothbrushes. It only has one brushing mode which you can easily get access to by simply pressing the power button.

Taking into account how lenient they are in terms of value, the fact that it only offers one brushing mode is fair. However, if you’re seeking exceptional results over a short period of time, just one setting won’t necessarily be effective enough, especially if your oral health issues are severe.

Another concerning factor that both Pro 1000 and Vitality have is regarding its battery life. Though the Pro 1000 lasts for 10 days in contrast to the Vitality’s 8, both are still not as impressive when compared to other models that you can find when working around a tight budget. The battery life also renders them incapable of being ideal buddies to rely on when going on a trip.

Taking into account all the differences, key features, and similarities that the Pro 1000 and the Vitality have, the Pro 1000 is the model that I’d personally like to recommend. The reason behind its technological features. Despite offering only one brushing mode, the Pro 1000 is definitely more effective at cleaning and tackling minor and major dental hygiene issues due to the presence of pulsations, oscillations, quadpacer and 3D technology.

Even though the Pro 1000 is dominant when compared to the Oral-B Vitality, the latter could be a great option to resort to if you’re seeking a minor upgrade with a generous price tag.

The Oral-B Vitality does contain 2D technology which is definitely less powerful than the features that 3D technology offers, but it’s definitely on another level when compared to regular toothbrushes. It could also be a good piece of equipment to start with if you want to tackle specific oral health issues as the brush Floss Action brush head it comes with isn’t the only available option.