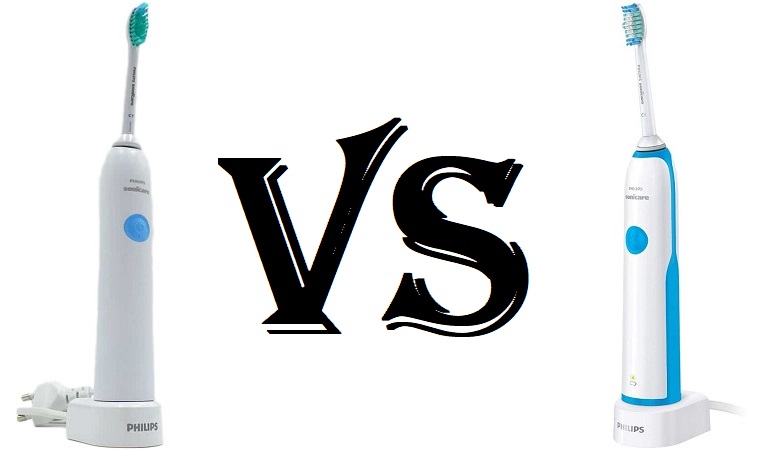 Relying on Philips Sonicare could be a great decision for you to make if you’re a fan of electric toothbrushes. Two tech-friendly options that the brand has are the 1100 and 2100, which could also be music to your ear if you’re working on a tight budget.

When it comes to price, it’s rather tough to figure out which one the better option is since they both offer affordability. However, when everything else is added into the mix, the winner amongst the two is crystal clear! Make sure to tag along and join me on this journey as I reveal to you all the benefits, drawbacks, and my preferred pick amongst the two brothers: Philips Sonicare 1100 and Philips Sonicare 2100!

In order to really discover their potential, I had to take the age-old technique and try them out myself, and thanks to reliable websites, finding the 1100 and 2100 was probably the easiest task!

For this particular scenario, instead of using them consistently for 30 days, I used both of them for 1 week straight. I used the 1100 during the day time, and closed my night by removing the residue from dinner using the 2100. Although it did feel conflicting and came across rather challenging at the end. It did allow me to examine each prospect in detail.

Regardless,  here’s a summary of the time I had with the Philips Sonicare 1100 as well as the Sonicare 2100! 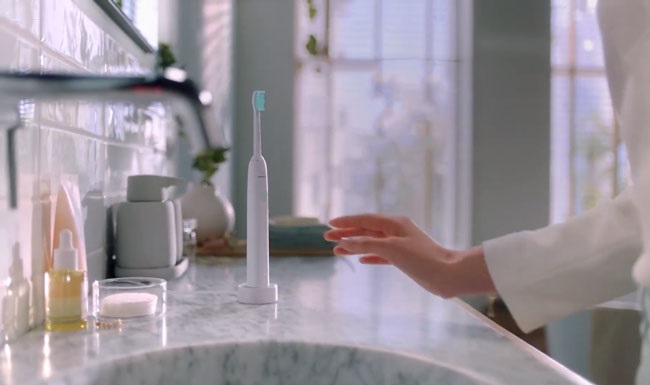 Despite missing out on a few features in contrast to its counterpart, starting my day with the assistance of Philips Sonicare 1100 was absolutely delightful. In addition to having an exceptional battery life, the visuals of it were rather sleek and minimal; a look that I often side with. However, with each day, I realized how there was more to the Philips Sonicare than met the eye.

Although I often find myself spending a bit extra due to my “quality over quantity” mindset, the generous price tag of the 1100 really caught me off guard, and had me sold at first sight. As opposed to its counterpart, the 1100 is extremely affordable, which could be music to your ears if you’re trying to save up for something else.

Additionally, because it is so cheap, you can even invest in a Philips Sonicare 1100 if you’re going on a short trip. Due to how inexpensive it is, traveling with it won’t just keep your dental hygiene in check, but also keep your pockets more full!

It is User Friendly

Another feature that I adored about the Sonicare 1100 is the simplicity behind its features. Yes, I do believe that its counterpart takes the edge when it comes to versatility, but the Sonicare 1100 is definitely a bargain for those that are seeking to ditch their manual toothbrush and invest in a reliable electric one.

The quadpacer it attains comes with a time limit and tends to shutdown automatically after 2 minutes, which should definitely be something to consider if you’re similar to how I was a few years ago: an amateur.

Efficiency At Its Finest

One thing that really sold me on the Philips Sonicare is how efficient it is for its money. Even though I didn’t see much of a difference in the first few days, I could really feel the tool cleaning even the most unreachable portions of my gum without an issue.

While I was a bit hesitant at first due to its 2 minute timer, I realized the necessity of it once I started using it on the regular. It is just that efficient! 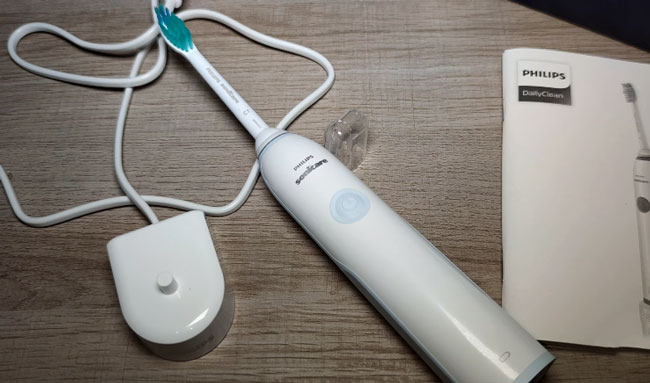 Since the Philips Sonicare 2100 is more technologically advanced than its counterpart, I really tried to look into that aspect of the electric brush. Even though the build was just as lean and slim as the 1100, the 2100 that I bought came in white mint as opposed to its opponent, which had a slightly neutral color scheme.

Due to how eerily similar they were, both contenders looked the same on paper. However, once I incorporated the 2100 into my daily routine, I realized a noteworthy difference in addition to minor dissimilarities.

Since the Sonicare 2100 does have more upgrades than the 1100, I wasn’t surprised when every session left me visibly speechless. The two intensity settings really allowed me to control the pace and deal with every plaque buildup, and even prevented me from overcleaning an area thanks to the time limit it comes with.

Additionally, due to reprising the same build as the 1100, gliding it through my teeth and my gums wasn’t challenging at all. In fact, Taco Tuesday seemed like a hit, especially because I didn’t go to bed with a layer of taco shells in my mouth!

On the third day, I was rather tired of following the same regime over and over again. To deal with that, I packed my bags and went over to a friend’s for a change in scenery.

When packing up my stuff, I also realized just how easy it was to fit in the compact electric brush in my backpack. Unlike the previous models that Panasonic had, the sleek and slender nature of it barely took up any space. It was also extremely resilient against the bumpy ride that I had when going over to my friend’s, which I believe was just a hidden trait behind this gem!

Great Purchase For Its Value

Alright, I’ll be honest. When I initially looked at the price tag, I, alongside most users, was definitely a bit infuriated because of how high it was in contrast to its opponent. However, with each passing day, I realized just how effective it was than the 1100. Due to its intensity settings, it easily worked around all my pre-existing plaque buildup and decreased it significantly in just 7 days!

Common Similarities Between Sonicare 1100 and 2100: The Good and The Bad

Despite having differences, there were a lot of similarities, both good and bad, that I found within the groundwork of the models 2100 and 1100, and it wasn’t just all about the visuals!

Good: Both Are Super Good At Their Job

While I do feel that the 2100 made my teeth feel exceptionally clean, the 1100 was also just as useful for my teeth. Although the second intensity setting’s absence was felt during daytime, the quadpacer both of them attain really allowed me to control the pace, and learn when to stop brushing one portion of my mouth.

When you pit them against each other, the Sonicare 1100 surely stands out in terms of price. On the contrary, when you put them in a pool full of other options, the price tags on both the electric brushes seem rather convenient, if not, a bargain! In fact, I was moderately surprised when I realized that I barely had to spend anything to buy both of them together.

Since the build of each model comprises the same dimensions, I’d say both could be an excellent means of investment if you’re planning to go on a short trip with your friends. On top of being exceptionally easy to pack, both models are extremely durable under unfavorable circumstances.

Additionally, both of them have an extremely lengthy battery life! Take my word for it! Although I used them for around 7 days at most, I still could have gone another week without having to charge either of them since they last for 14 days on an average.

Bad: Neither Of Them Have An Adapter

The packaging of both 2100 and 1100 came with a USB cable and a brush head in addition to the product itself. However, one thing that both lacked was the presence of an adapter, which is crucial to charge the battery of each electric brush.

Even though I already had loads of adapters in hand due to my knack for electric brushes, this missing aspect of theirs really did concern me immensely.

Bad: The Sensor Stops Working From Time To Time

When using both the options, a regular issue that I had to deal with was regarding its sensitivity. Although both of them contain a Quad Pacer, the main use of it, which is to make every session as gentle as possible, went missing on multiple occasions. Not only did it stop working, but I also bruised my gums up quite a bit when proving that issue to myself.

Here’s a summary of the highlights as well as the lowlights that both 2100 and 1100 consist of.

Bottom Line: It Was A Close Fight!

Coming to a decision is never easy for me due to my habit of being indecisive, but after making a list of pros and cons, the winner, in my opinion, is the Philips Sonicare 2100. Why, you ask? Because it has a better deal!

For an amount that is slightly higher, you can get yourself something that has more features, and can get rid of your visit to a dentist. It can get rid of years of plaque build up in just a few weeks, and even though the sensor is known for being unresponsive from time to time, that issue can easily be resolved if you purchase the product from a reliable source. Regardless, although you might have to spend a little more than you have, the Philips Sonicare 2100 is something that is worth the investment! It is to me, at least!

Furthermore, if you do have a bigger budget, in addition to taking into consideration the potential of Philips Sonicare 2100, you can also save up and pamper yourself with advanced models like the Philips Sonicare 4100, 5100 or 6100 instead!